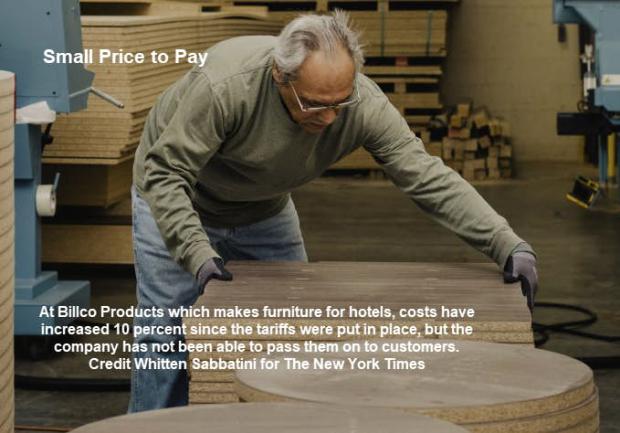 Trump promised to bring manufacturing jobs back to the US. In reality, Trump Tariffs Send Jobs Away.

EBW Electronics: "It's killing us," said the chairman of the company, Pat LeBlanc, 63, a Republican who voted for Mr. Trump. He now expects the president's tariffs will chop his 2019 profits in half. "I just feel so betrayed. If we fail because the company is being harmed by the government, that just makes me sick."

"It's a tax that comes right off the bottom line," said EBW's president, Cory Steeby. "It totally incentivizes you to move out of the United States and build either in Canada or Mexico. These are active conversations right now."

Bilco Products: "Even though it's hurting me, I hope we have the guts to stick it out," said Tom Sligh, president of Billco Products, which makes cabinets, dressers and other furniture for hotels at three factories in Holland. Mr. Sligh relies on imported quartz countertops and metal parts — door handles, gliders and other hardware — much of it made in China. The tariffs have increased his costs by 10 percent, he said, but he has not been able to pass them on. He recently lost a bid to outfit a hotel in Grand Rapids when a Chinese competitor offered less than half his price.

Supporting Trump on tariffs is downright idiotic, but Tom Sligh is one of those true believers. Ironically, Sligh shifted to suppliers in Vietnam, Malaysia and India because the parts he needs are not available in the United States, or are wildly expensive, he said.

Biden Wants to Give Us the Right to Repair. Now What?

The future of gas stations: Do EVs dismantle local pumps?

Lego Demands US Gunmaker To Halt Sales Of "Block 19" Pistol

BlackRock Closes In on the Once Unthinkable, $10 Trillion in Assets