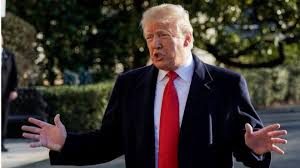 "President Donald Trump stood firm Sunday on his demand for billions of dollars to fund a border wall with Mexico, which has forced a shutdown of the US government now entering its third week," Agence France-Presse reported today, Jan. 6.

"'We have to build the wall,' Trump told reporters as he left the White House for the Camp David presidential retreat, while conceding that the barrier could be 'steel instead of concrete.'

"Building a wall along the 2,000-mile (3,200-kilometer) US-Mexico border was a central plank in the 2016 election campaign of Trump, who has sought to equate immigrants with crime, drugs and gangs," the Paris-based news service concludes. 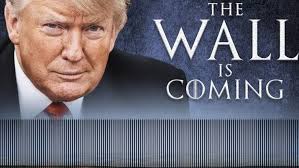 Now, despite five years of bookish high-school instruction, my French is far from perfect, I'll admit. So I might on occasion grant the frog-eaters among us a little leeway in their English constructions. But this kind of thing has simply become too common all across the American and European media to be dismissed as some kind of "slip-up," so let's NOT let it go, this time.

Has President Donald Trump sought to "equate immigrants with . . . drugs"? At the risk of seeming a bit pedantic, I turn to a commonly accepted authority, my Webster's New Twentieth Century Dictionary of the English Language, Unabridged. It tell me "equate" means "to make equal or equivalent; treat, regard or express as equal or equivalent."

Has President Donald Trump ever stated or implied that "immigrants" ARE "drugs"? That they somehow ACT is the same way as "drugs" (obviously referring not to penicillin or tetracycline, but to the controlled drugs of abuse — heroin, cocaine, and the like)? By which of the two most common methods do "immigrants" have the same effect on Americans citizens and legal residents as "drugs"? Do Americans degrade themselves into single-minded addicts by INJECTING immigrants into their bloodstreams, or by drying the immigrants out, chopping them up, and SMOKING them?

Yes, this is ridiculous. Neither candidate Trump nor President Trump has ever "equated immigrants with drugs" or with crime . . . in large part because this debate isn't about "immigrants" (when that word is used without the necessary adjacent adjective), at all. 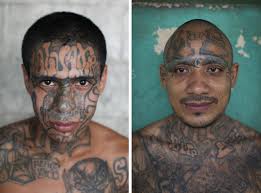 The globalists would LIKE TO HAVE US BELIEVE that Donald Trump hates and wants to block new "immigrants," and proves himself a racist by opposing especially HISPANIC immigrants (who for the most part are neither Asian nor black, the term "Hispanic" meaning "descended from people who came to the New World from Spain," meaning they are for the most part genetically predominantly CAUCASIAN, since most people from Spain are Caucasian, which is to say, "white.")

In fact, President Trump has said many times that he welcomes legal immigrants — his own mother was a legal immigrant, as is first lady Melania Trump.

"Mass uncontrolled immigration is especially unfair to the many wonderful law-abiding immigrants already living here, who followed the rules and waited their turn," the president said two months ago, on Nov. 1. . . . ( https://www.lifezette.com/2018/11/trumps-crackdown-on-illegal-immigration-protects-all-americans/ .)

The Globalist Lamestream Media haven't just "slipped up and missed" this. President Trump says it every chance he gets, often adding that America needs skilled immigrant workers — admitted on a merit basis — to staff all the businesses now moving back into America due to his trade policies. (Is this "racist"? Try to emigrate to Switzerland or Germany or even Australia or England if you can't show you're rich enough or skilled enough to pay your way . . . unless of course you're a cleaver-wielding Muslim murderer. . . . https://www.dailymail.co.uk/news/article-2329089/Woolwich-attack-Two-men-hack-soldier-wearing-Help-Heroes-T-shirt-death-machetes-suspected-terror-attack.html .)

Back in March of 2016, "GOP presidential front-runner Donald Trump on Sunday halted a campaign rally in Illinois, handing his podium over to a man sporting a 'legal immigrant for Trump' shirt," The Hill reported at the time. ( https://thehill.com/blogs/ballot-box/presidential-races/272838-trump-welcomes-legal-immigrant-for-trump-onstage .)

"People are going to come in to our country — we want them to come in, but they've got to come in like you: legally," Trump said during the event in Bloomington, Ill., upon noticing the listener.

"Come on, bring him up," Trump told his security detail. "He knows if he makes a move he's going to get clobbered by these guys."

Trump then welcomed the man on stage, eventually turning over the microphone and letting the supporter address his crowd.

"I came to this country when I was 5 years old, and my dad went through hell to get us citizenship," the man said. "We did it by the book.

"I'm here because the media does not separate legal immigration from illegal (immigration.)" 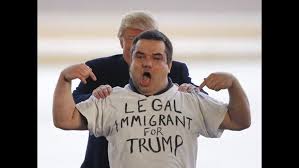 This from a man who identifies himself — as do millions of others — as "legal immigrants for Trump."

So, French gentlemen and ladies, are you sure you didn't mean to write that "Trump has sought to point out that a wide-open, wall-less border allows the uncontrolled influx of ILLEGAL aliens — MILLIONS of them — that is to say, allows the INVASION of this country by law-breakers (ALL so-called "undocumented immigrants" being law-breakers), many of whom BRING IN potentially addictive drugs of (dangerously) unknown purity and potency, BELONG to violent criminal gangs, and who after they have entered America ILLEGALLY proceed to COMMIT many crimes, such as the murders of Kate Steinle and California police officer Ronil Singh, himself the kind of LEGAL immigrant who President Trump has repeatedly CELEBRATED AND WELCOMED to America"? (
https://www.mercurynews.com/2018/12/30/suspect-7-others-arrested-in-fatal-shooting-of-california-police-officer-2/ ) 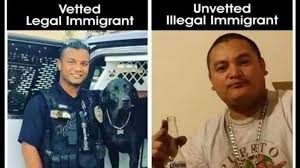 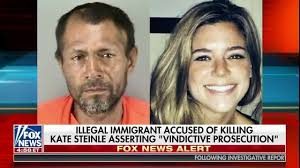 Why does the globalist media have so much trouble saying the words "ILLEGAL ALIEN" — or even "ILLEGAL immigrant"? Omitting the adjective has the same effect as changing the statement of someone who has said "It's OK to shoot rabid dogs" to report that they've said "It's OK to shoot dogs" or changing the statement "Doctors in prisoner-of-war camps of course may amputate gangrenous limbs at their discretion" to "Doctors in prisoner-of-war camps may of course amputate limbs at their discretion."

See how omitting the necessary, limiting adjective changes the meaning of the statement?

Pardon me, was that too subtle and understated? Do you see how BY DELETING THE NECESSARY, RESTRICTIVE ADJECTIVE YOU ARE PURPOSELY LYING IN ORDER TO MISLEAD YOUR READERS?

Why are you doing that? 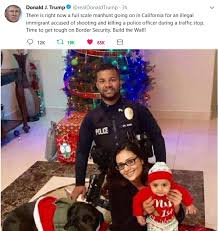 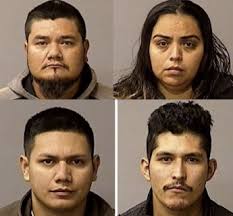 You can leave a response, or trackback from your own site. | Category: 2020 Elections, Crime, Immigration, Law Enforcement, Media, Politics, The Deep State, Trump Derangement Syndrome