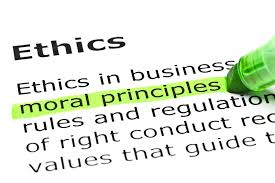 When you see publishers and authors chatting chummily at book parties, you're likely to think that they're on the same side — the side of great literature and the free flow of ideas.

In reality, their interests are at odds. Publishers are marketers. They don't like scandals that might threaten their bottom line — or the bottom lines of the multinational media conglomerates of which most form a small part. Authors are people, often flawed. Sometimes they behave badly. How, for instance, should publishers deal with the #MeToo era, when accusations of sexual impropriety can lead to books being pulled from shelves and syllabuses, as happened last year with the novelists Junot Díaz and Sherman Alexie?

One answer is the increasingly widespread "morality clause." Over the past few years, Simon & Schuster, HarperCollins and Penguin Random House have added such clauses to their standard book contracts. I've heard that Hachette Book Group is debating putting one in its trade book contracts, though the publisher wouldn't confirm it. These clauses release a company from the obligation to publish a book if, in the words of Penguin Random House, "past or future conduct of the author inconsistent with the author's reputation at the time this agreement is executed comes to light and results in sustained, widespread public condemnation of the author that materially diminishes the sales potential of the work."

That's reasonable, I guess. Penguin, to its credit, doesn't ask authors to return their advances. But other publishers do, and some are even more hard-nosed.

This past year, regular contributors to Condé Nast magazines started spotting a new paragraph in their yearly contracts. It's a doozy. If, in the company's "sole judgment," the clause states, the writer "becomes the subject of public disrepute, contempt, complaints or scandals," Condé Nast can terminate the agreement. In other words, a writer need not have done anything wrong; she need only become scandalous. In the age of the Twitter mob, that could mean simply writing or saying something that offends some group of strident tweeters.

Agents hate morality clauses because terms like "public condemnation" are vague and open to abuse, especially if a publisher is looking for an excuse to back out of its contractual obligations. When I asked writers about morality clauses, on the other hand, most of them had no idea what I was talking about. You'd be surprised at how many don't read the small print.