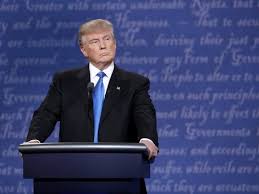 Donald Trump's visit this week to US forces in Iraq has to be seen as a highly peculiar move. Following his announcement to pull troops out of Syria and Afghanistan, which caused a split with senior Pentagon figures, it seems that Trump was making a desperate bid to reassure the military establishment. Perhaps even to forestall a feared coup against his presidency.

For nearly two years since his election, President Trump had not visited US troops in any active combat zone, unlike all his predecessors in the White House. His apparent indifference to overseas forces had engendered much consternation from political opponents and the media. In a recent editorial, the New York Times admonished: "Put Down the Golf Clubs, Visit the Troops".

Recall, too, the US media scorn heaped on Trump when, during his trip to France in November to mark the centennial end of World War One, he declined to pay his respects at an American war cemetery "because it was raining".

Trump is therefore not the sort of person to put himself in discomfort for others. That's why it seems all the stranger that on Christmas Night, December 25, the president and his wife Melania left the comfort of the White House, and boarded Air Force One for a 6,000-kilometer overnight flight to Iraq.

The journey to Iraq was variously described in US media as a surprise and "shrouded in secrecy". So secret indeed that the Iraqi government was not even informed in advance of Trump's arrival. A hastily proposed meeting with Iraqi Prime Minister Adel Abdul-Mahdi did not take place because the Iraqis were only given a couple hours notice when the US president landed.

In total, Trump and his delegation spent only three hours in Iraq and a reported 15 minutes talking to troops at Al-Asad Air Base, near the capital Baghdad. The president then flew back to Washington, making a brief refueling stop in Germany. Talk about a whirlwind spin halfway around the globe – and for what?

What this all suggests is that Trump's visit was a hasty, ad hoc event that appears to have been done on the spur of the moment, in reaction to the news cycle over the past week.

As the New York Times put it: "The trip, shrouded in secrecy, came… less than a week after Mr Trump disrupted the military status quo and infuriated even some of his political allies by announcing plans to withdraw all troops from Syria and about half from Afghanistan. The president's decision on Syria led to the resignation of Defense Secretary Jim Mattis."

Mattis' resignation, followed by that of another senior Pentagon official, Brett McGurk, showed that there was serious pushback from the military establishment to Trump's pullout order from Syria and Afghanistan.