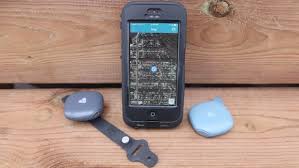 The less-expensive Bluetooth devices are attached to the dog's collar, with an app subsequently showing the user which direction to go in order to find the animal. Unfortunately, though, these devices have quite a short range – usually no more than about 200 ft (61 m).

GPS pet-trackers also get attached to the collar, then proceed to continuously acquire and transmit their geographical coordinates via a cellular signal. Utilizing an app, users can track the location of their dog from anywhere there's coverage. The downside, however, is that monthly data fees are required.

The Findster system is likewise GPS-based, although it requires no cellular service. Along with an iOS/Android app, it consists of a collar-worn Pet module, and a Guardian module which the user carries with them. Utilizing the company's MAZE technology, the Pet module independently acquires its GPS coordinates, but then uses an ISM-band radio signal to continuously transmit that data to the Guardian. That module in turn uses Bluetooth to relay the information to the app.

On that app, users see the relative locations of the Guardian and the Pet modules on a satellite map of the area – in other words, the locations of themselves and their dog. They can then set out to reclaim their critter, with the positions of the modules being updated on the map as both parties move around.