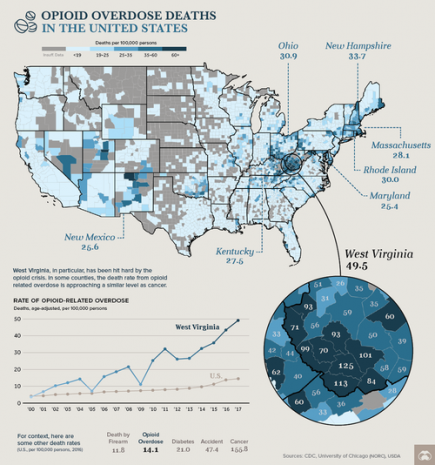 In total, there were a staggering 70,237 drug overdose deaths last year, which is more deaths than all US military fatal casualties of the Vietnam War. Opioids were involved in 67.8%, or 47,600 of those deaths. Of those opioid-related overdose deaths, 59.8% of them, or 28,466, were due to synthetic opioids.

The report, which was published online in the CDC's Morbidity and Mortality Weekly Report (MMWR), also examined drug overdose deaths from 2013-17. During that time, "drug overdose death rates increased in 35 of 50 states and DC, and significant increases in death rates involving synthetic opioids occurred in 15 of 20 states," the report said adding that the rapid increase was driven by fentanyl.