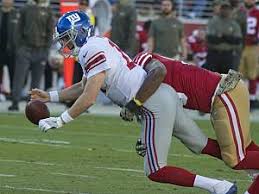 Two brothers were arrested at a Giants-49ers game after cursing out and flipping off the Giants players. Now they're suing.

Two brothers allege in a federal lawsuit that police officers working a Giants-49ers game last year in Santa Clara, California, violated their First Amendment rights and arrested them without cause, using excessive force in the process.

Patrick and Kyle Flynn's lawsuit, filed December 21 in the San Jose Division of the U.S. District Court for the Northern District of California, raises an interesting question: Does the First Amendment protect a sports fan' right to flip off their team in public and tell them they "fucking suck?"

Short answer: It's hard to tell.

Long answer: It depends on a variety of factors, including whether the fans were aware they had to follow a code of conduct, the ownership of the venue (Is it publicly or privately owned?), and the nature of their behavior.

Some background: The Flynn brothers, both Giants fans, had field-level seats when the 49ers hosted the Giants on November 12, 2017, at Levi's Stadium. Both teams were going through a rough stretch. The Giants, who had gone into the year with somewhat high expectations after making the playoffs the season prior, were one of the worst teams in the National Football League at 1-7. The 49ers were expected to be near the bottom of the standings, and they were, at 0-9. But in a battle of the bottom-feeders, the 49ers prevailed, defeating the Giants 31-20.

Disgusted by their team's poor play during the game, the Flynn brothers flipped off Giants players and yelled "you fucking suck" at them, according to the lawsuit. They were warned by Santa Clara Police Officer Nicholas Cusimano to stop, which they did for a time. Neither brother, the suit says, was "warned that further similar behavior would lead to ejection or arrest." In the fourth quarter, after the 49ers scored a touchdown to take a commanding 31-13 lead, the Flynns were back at it.

At that point, Cusimano called for more officers to help him eject both Flynns. Two officers approached Kyle Flynn, who refused to get up from his seat. One officer choked him, the suit claims, "despite no evidence that Kyle was a danger to himself, others, or the officers." The officers were eventually able to handcuff Flynn and take him to a holding facility beneath the stadium. While detained, he kept verbally protesting and was thus placed "in a total body restraint called a WRAP which immobilizes the legs and upper torso," according to the suit. Flynn was charged with resisting arrest, but the charge was dropped earlier this month.