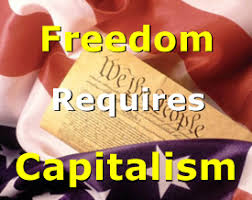 Of course, people's ideas about what constitutes freedom can vary widely, depending upon whether they view the world from the right or the left.  Speaking for myself, I believe that the easiest way to define freedom is to call it the antithesis of communism.

Karl Marx and his lackey benefactor, Friedrich Engels, firmly believed that violent revolution was the only way to bring about pure communism, and that such a revolution was possible only where capitalism existed.  The reason for this, they believed, was because capitalism was a necessary ingredient for creating a wide financial disparity between the workers and the privileged class.

It's kind of weird that Marx and Engels sought to increase income disparity between the classes, then rectify the disparity through violent revolution.  Perhaps their thinking was a result of their being familiar with the colossal failure of the French Revolution, which led not to freedom but mob violence, unthinkable human carnage, and ultimately a Napoleonic dictatorship.

Neither Marx nor Engels lived long enough to witness the most notable communist revolutions, those in Russia, China, Vietnam, and Cuba, and it's interesting that none of these countries could have been considered capitalist countries at the time.  There's no question, however, that Marx and Engels would have considered the modern-day United States to be the perfect crucible for testing their convoluted class-warfare theory.

Today, only naïve utopian dreamers believe in the communist fairy tale that under communism, the state will eventually "wither away" because there will be so much of everything for everybody that government will no longer be necessary.

I do, however, believe that Marx and Engels were on to something when they referred to socialism as a "transitional stage of society" between capitalism and communism.  This should be explained to the masses, so when a Bernie Sanders or an economics-major (chuckle) like Alexandria Ocasio-Cortez hails the virtues of socialism they understand what a socialist society actually looks like.

Here in the United States we have long suffered from the delusion that "European-style socialism" is a nice, peaceful, cradle-to-grave compromise between capitalism and communism.  Elitists on both the right and the left have come to believe that Western society is static and that so long as Western countries keep their redistribution-of-wealth policies finely tuned, capitalists will go right on producing enough wealth to support the parasitic masses.