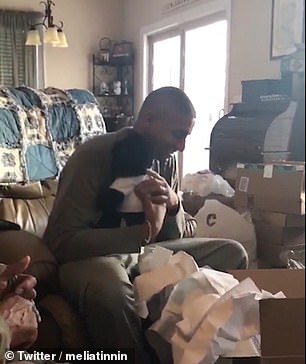 -After he realised it played his late mother's voice, he broke down in tears

-The clip has now gone viral with some 5.93 million views on social media

A woman has shared a heartwarming video of the moment her father hears his late mother's voice coming from a teddy bear.

Melia Tinnin, from Winston-Salem in North Carolina, revealed on Twitter that her sister had bought their dad the soft toy with the recording in it after he refused to upgrade his phone for fear of losing the precious voicemail.

The video, which has been viewed 5.9million times, sees Tinnnin unwrapping the bear and then being told to 'press a button' on it.

What echoes out into the room is a voicemail left for him by his mother prior to her death.

Scroll down for video