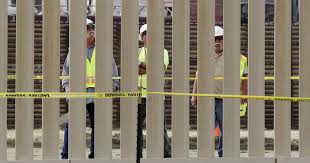 Someone in the news media finally asked the White House an uncomfortable question — no, not Jim Acosta, whose only question is, "Are we fake news, Mr. President," said with a daring stare — and it came from "Fox & Friends" of all places.

"[P]eople who voted for him and want the wall, went to the polls to vote for that wall, they want to know how he's going to do this and they want to know why he seems to be softening his stance this morning," asked Earhardt.

Conway replied with a preposterous claim that Trump "is not softening his stance" and then she did what Democrats have been doing: Insist that a wall isn't as important as some vague assurance about "border security."

She might as well have come out in favor of "a woman's right to choose," "common sense gun reform" and other Democratic positions, the true intentions of which are forever masked by doublespeak.