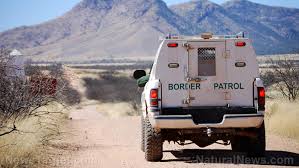 (Natural News) Anyone who doesn't yet realize the U.S. government is gearing up to defend America against a major land invasion of foreign nationals needs to look at this press release from December 10, 2018: U.S. Department of Homeland Security (DHS) Awards Federal Premium a .223 Remington Ammunition Contract.

The press release describes a 5-year, $75 million contract to "provide the organization's agents and officers with .223 Rem duty and training ammunition."

For those who aren't familiar with firearms, .223 Remington ammo is used in AR-15 rifles. It's not technically identical to 5.56 NATO, but rifles that can fire 5.56 NATO can also fire .223 Remington.

These aren't pistol rounds, in other words, and they can be used by soldiers in military rifles.

In government quantities, these rounds cost roughly $0.20 each. This means that $75 million will acquire about 375 million rounds of ammunition.

That's a massive amount of ammunition. The average county sheriff's deputy is allotted approximately 50 rounds per month of duty ammo in order to maintain some minimum level of firearms proficiency. That't 600 rounds per year.

SWAT team members, the elite firearms squads of police departments, will often fire 1,000 – 2,000 rounds of ammunition per month in training. Active duty soldiers may go through several thousand rounds a month during certain periods of their training, and soldiers in hot war zones can, of course, burn through thousands of rounds a month, too.