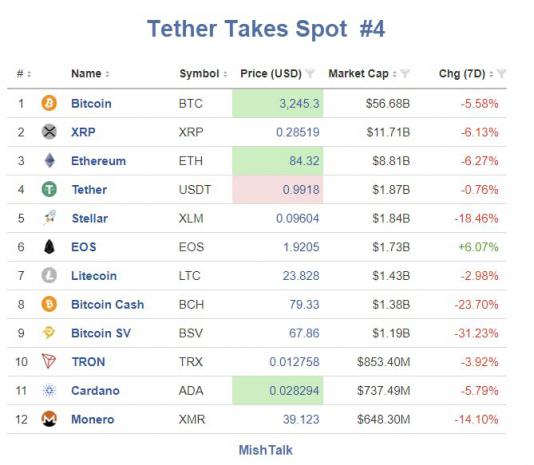 Tether is extremely controversial. Many doubt if the money is really there. It hasn't been audited, but it's now #4

[Tether](https://en.wikipedia.org/wiki/Tether_(cryptocurrency%29) is a controversial cryptocurrency with tokens issued by Tether Limited, which claims that each token issued is backed by one United States dollar though they may not necessarily be redeemed through the Tether platform. Tether is called a stablecoin because it is designed to always be worth $1.00.

Tether is supposedly pegged to the US dollar. In practice, it seldom trades there.

Is the Money There?

Trading data shows tether has generally hovered around $1, occasionally dipping as low as $0.80 or jumping as high as $1.10.

But the company's online critics have long alleged that Tether, which has close ties to the crypto exchange Bitfinex, has been issuing more USDT than it has dollars in the bank, in order to drive up the price of bitcoin.

That's a problem for investors because tether is rare among cryptocurrencies in that it carries counterparty risk – in other words, the possibility one party to a contract may not fulfill its end of the bargain. In Tether's case, the "obligation" is redeeming USDT tokens for dollars.

An audit by the firm Friedman LLP was supposed to prove that USDT was fully backed. But recently Tether abruptly announced that its its relationship with Friedman had ended. It remains unclear who dumped whom and why.

Now, with no audit forthcoming, the doubts are as pervasive as ever. When contacted for this column, a spokesperson for Tether would say only, "Regarding the audit, we have no further comment."

The Mystery Behind Tether, the Crypto World's Digital Dollar

In August, the Wall Street Journal investigated the Mystery Behind Tether.

In June, Tether hired law firm Freeh Sporkin & Sullivan LLP, co-founded by former Federal Bureau of Investigation Director Louis J. Freeh, which issued a report stating that it believed tether had full dollar backing. But the report, critics noted, wasn't an audit and the law firm wouldn't identify the banks it contacted to verify the reserves. Eugene R. Sullivan, a senior partner in the law firm, declined to comment, saying the report speaks for itself.

Chainalysis also found tether trading is increasingly concentrated among smaller, more speculative digital currencies, a sign it is being used as a tool of "pump-and-dump" schemes, in which traders hype an asset, causing its price to rise, before dumping it for a profit.

Tether trading in newer tokens such as EOS and NEO has risen to about 20% of overall tether volume, according to the report.

The Securities and Exchange Commission recently singled out tether in its rejection of a proposed bitcoin-based ETF, citing studies that raised the possibility that the digital currency is being used to manipulate the bitcoin market.

A company that the SEC has its eyes on, that is likely at the core of crypto pump-and-dump schemes, a company that has not released an audit despite repeatedly saying that it would, is now the 4th largest cypto market cap, up from number 10.