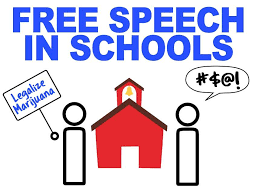 Watch the first episode of Free Speech Rules, a new video series on free speech and the law that's written by Eugene Volokh, the Gary T. Schwartz Distinguished Professor of Law at UCLA, and the co-founder of the Volokh Conspiracy, which is hosted at Reason.com.

The first episode looks at the seven things you should know about how the First Amendment is applied in schools:

1) Political and religious speech is mostly protected.
Students, from first grade to twelfth, can't be punished based on their political or religious speech. As the Supreme Court ruled in Tinker v. Des Moines Independent Community School District: "It can hardly be argued that either students or teachers shed their constitutional rights to freedom of speech or expression at the schoolhouse gates."

2) Disruptive speech is not protected.
Schools can punish speech that "materially disrupts schoolwork"—for instance, because it prompts fights.

3) Vulgar or sexual speech is not protected.
Schools can also punish students for using vulgarities or sexual innuendos.

4) Praising drugs is not protected.
Schools can punish speech that seems to praise drug use, and probably also alcohol use and other crimes, at least when the speech doesn't seem political.

How To Attend a Graduation Maskless

Academia And The Tragedy of The Smart Kids