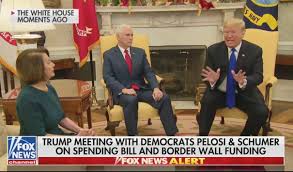 President Donald Trump had a surreal, explosive clash with Senate Minority Leader Chuck Schumer (D-NY) and House Minority Leader Nancy Pelosi (D-CA) at the White House over border wall funding for their first meeting together since Democrats took control of the House of Representatives in the midterm elections.

As Trump talked about the need for border security, the conversation grew increasingly tense as Pelosi and Schumer pushed back against his demand for $5 billion to fund the border wall.

Trump laughed that off as he continued to promise the wall's construction, saying "tremendous amounts" of it have already been built. After Trump slammed the migrant caravan on the move in Central America, the conversation delved into a three way sparring match on whether the wall is good policy, and whether the president has the congressional support he needs for its approval.