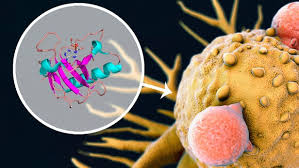 Researchers at MIT have used two experimental cancer drugs in tandem to fight melanomas. The team paired protein kinase inhibitors with ribonuclease drugs and set them loose onto tumors, and found that the combination worked better than either drug does alone. The discovery could help reduce side effects of cancer treatments and make them more effective.

Ribonuclease drugs have been in development for decades as a potential weapon against cancer. These enzymes are naturally produced by all human cells, and their job is to clear out unneeded cellular RNA or that of invading viruses. Harnessing that process and aiming it towards cancer cells has formed the basis of ribonuclease drugs, which are currently in phase 1 clinical trials and reportedly have a success rate of about 20 percent.

While both methods seem promising in their own right, they aren't without their issues. Ribonuclease drugs can also harm healthy cells, and tumors can eventually develop resistance to protein kinase inhibitors. But the MIT team unexpectedly discovered a link between the two that helps them cover each other's weaknesses.

Essentially, cells use kinase proteins to protect themselves from destructive ribonucleases. So, using a kinase inhibitor stops cancer cells from defending themselves, giving the ribonuclease a better chance to get in there and destroy the tumor's RNA.