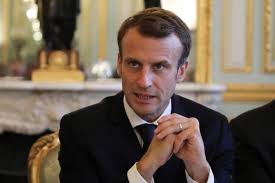 With his popularity rating at record lows (recent polls put it at around 26%, on par with Hollande), his capital city burning and the populists he defeated during his stunning electoral victory last year making serious electoral inroads, French President Emmanuel Macron finally caved, and on Tuesday ordered a six month suspension of planned 'fuel taxes' which spurred widespread and destructive protests across France over the past three weeks.

After reportedly weighing declaring a state of emergency that would have cleared the way for an unprecedented crackdown on dissent, Macron decided that such measures would only intensify the popular opposition to his government. And according to Reuters, Prime Minister Edouard Philippe has declared a suspension of the staggeringly unpopular tax.

"No tax deserves to endanger the security of the nation," Philippe said in a televised address, who on Monday held separate meetings with opposition party leaders, in which they demanded the scrapping of the planned increase in fuel taxes. The same day striking students closed down 100 high schools and rising fuel shortages were reported in some parts of the country.

A freeze of planned fuel tax increases was one of a number of measures called for in an editorial by 10 self-proclaimed gilets jaunes representatives published on Sunday in the Le Journal du Dimanche newspaper. They also demanded the holding of countrywide consultations over taxes.

The decision marked the first time that Macron has backed down from implementing an unpopular policy in his 18-month presidency as a result of the furious public response, and is set to unleash even more protests as the emboldened French people now realize that taking to the streets will results in success.