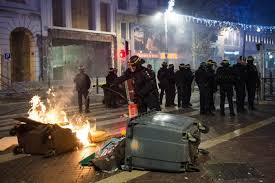 French President Emmanuel Macron will hold an emergency meeting of senior ministers on Sunday following the worst unrest Paris has seen in decades on Saturday.

Government spokesman Benjamin Griveaux told France's Europe 1 radio that a state of emergency may be imposed to prevent "serious outbursts of violence" after thousands of masked "Yellow Vest" protesters fought with police, and set fires to cars, houses and banks in the worst disturbances France's capital has seen since 1968, when Macron's wife was fifteen - the same age the French president was when they met.

Griveaux had indicated the Macron administration was considering imposing a state of emergency. The president was open to dialogue, he said, but would not reverse policy reforms.

"We won't change course. We are certain of that," he told Europe 1 radio. -Reuters

On Saturday riot police were overwhelmed as protesters embarked on their destructive crime spree. Macron, meanwhile, denied that a state of emergency had been disccussed.

A French presidential source said Macron would not speak to the nation on Sunday despite calls for him to offer immediate concessions to demonstrators, and said the idea of imposing a state of emergency had not been discussed.