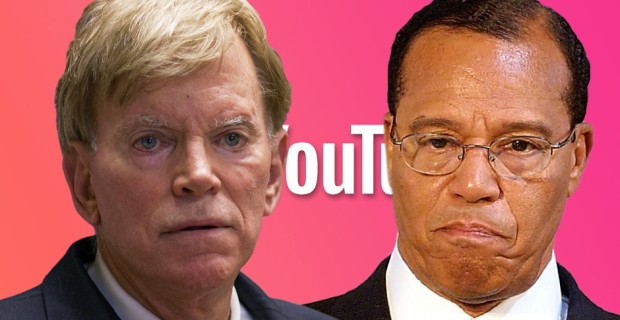 As part of the coordinated Big Tech purge targeting Infowars, Jones' YouTube channel, which had over 2 million subscribers at the time, was completely removed by Google-owned YouTube back in August.

Even videos uploaded by other users which briefly feature Jones are still being removed, with the radio host having been completely de-personned by the corporate giant.

However, the video platform is still hosting content from proven race hate hustlers Duke and Farrakhan.

David Duke is an open white supremacist, an anti-Semite, a Holocaust denier and a former Grand Wizard of the Ku Klux Klan. Duke was credited with having "paved the way" for the alt-right movement. He also attended the far-right 'Unite the Right' rally in Charlottesville at which an alt-right terrorist rammed his car into a group of protesters, killing one.

Farrakhan is leader of the notorious Nation of Islam, which is listed as a hate group by the Southern Poverty Law Center.

Farrakhan has made numerous racist, anti-Semitic and homophobic statements, including his belief that white people are a "race of devils" created by an evil scientist.