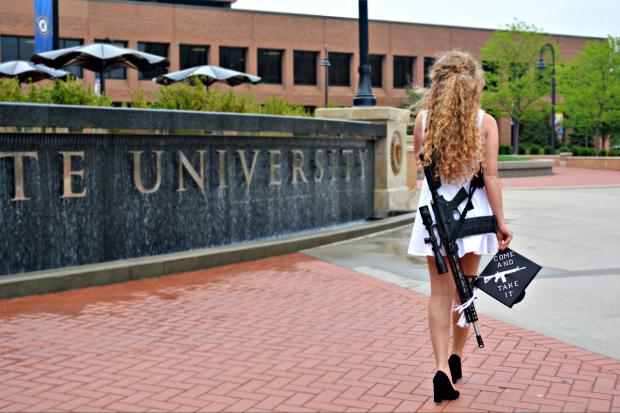 Well, the school, and I'm sure many Communist gun grabbers would have liked for Kaitlin to disappear silently into the night after graduation.  They are not going to be seeing that though, as she has won her first round in a suit against the university over its gun policies that allow a non-student to open carry but not students.

Here's how she caught national attention earlier this year.

Following graduation, Bennett took a position at a local gun shop and continued her activism, even targeting David Hogg with an arm wrestling challenge which he was not equipped for nor responded to it.

She also was informed by the FBI that people had been reporting threats against her to them.

Bob Alderman at The New American reports on an update:

She and the group she founded and ran while on campus, Liberty Hangout, held an "open carry gun walk" on campus in September. So outraged were anti-gun groups that hundreds showed up in protest, forcing the university to hire between 300 and 400 SWAT officers, sheriff's deputies, state troopers, and police from across the state to keep the peace. Hundreds of protestors showed up and four were arrested. It cost the university an estimated $65,000.