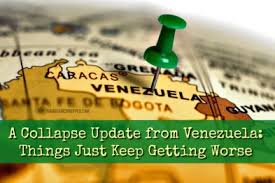 I have been trying to solve a couple of issues this past week, mainly related to my parents' health. Dad just had an event with his equilibrium (he is almost 80 so it is perfectly understandable), and he hardly could come back home in his old car. Amazingly, he did not crash or got injured in the way back. In the pictures, I have seen he is alarmingly thinner. I will send him some nutritional additions as soon as I can. I have been going through some personal and familial issues that demanded lots of attention and care and had to leave the city for some days up to work a few days in a place without any kind of coverage, not even landline, in the middle of nowhere. I survived though.

Why the collapse is still going on.

Well, it is a known fact that a slow, painful collapse is definitely the worst possible scenario. Its effects are long term, the suffering it inflicts has effects on too many people, and last too much time. It affects other countries' economies and societies, on time.

In our example, this is exactly what is happening.  I read the report of a Venezuelan journalist, much smarter than me, where he explains the exact reason with very clever words, of why the mafia is still in power. His analysis is that the regime is not a vertical structure. Otherwise, it would have been much easier to overcome with conventional methodologies. The reason is that the structure is not like, for example, the Iraq government where Saddam controlled everything.

In Venezuela, the power is exerted by small, powerful because they are armed and have support from traitors as internal sources) gangs that are scattered all over the country. These can be with or without uniforms. It is very likely there are foreigners with them too, not openly but in the torture/imprisonment facilities.  This kind of division offers new perspectives to know where exactly the combat should start. I would dare to say that, once we understood how they operate, it should be much easier to remove them.

Local warlords should have local interests…and local thugs to "attend" such interests, too. With some basic surveillance and taking care of the local snitches, enough information could be collected for some groups to start cooking something decent.

Yes, I am a libertarian. This kind of love for freedom is beyond nationality. That is why the communist world fears it that much and wants to eliminate it so badly.

But I would not like to analyze too much the political aspects this time. It is effectively covered, at least in its main aspects, in other articles.