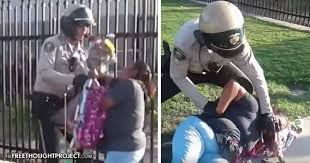 After a disturbing video captured California deputies savagely attacking a woman for selling flowers without a permit surfaced, a lawsuit was announced.

Perris, CA — In the Land of the Free, if you do not pay the State before you attempt to sell a product or service to a willing customer, you can and will be extorted, kidnapped and caged, with extreme prejudice. A video published to Facebook backs up this notion, showing a Riverside County Sheriff's Department deputy assault a woman who was selling flowers on the side of the road — because she apparently failed to pay the State for the privilege. Now, because the deputy's actions were so egregious, the taxpayers are going to be held liable.

The victim, Joaquina Valencia, was selling flowers outside of a high school graduation ceremony in Perris last year when the altercation began. Because she was treated like a dog and savagely attacked, Valencia announced a lawsuit this week against the department.

Valencia says in the lawsuit that no human should ever be treated the way she was. "He tossed me like a rag," Valencia said in an interview with NBC Los Angeles.

The complaint alleges Valencia was "unjustifiably beaten, shoved to the ground and arrested."

The video does not tell the entire story. However, it starts as the officer is grabbing a woman who is holding multiple sets of flowers, clearly arranged for sale on the roadside.

As the video begins, the motorcycle officer is grabbing the woman by the arm. The woman, who apparently doesn't speak English, is clearly terrified.