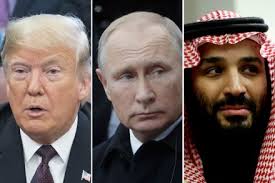 While OPEC struggles to find common purpose, the U.S., Russia and Saudi Arabia dominate global supply. Together they produce more oil than the 15 members of OPEC. All three are pumping at record rates and each could raise output again next year, although they may not all choose to do so.

It was Saudi Arabia and Russia that led the push in June for the OPEC+ group to relax output restraints that had been in place since the start of 2017. Both subsequently jacked up production to record, or near record, levels. U.S. output soared unexpectedly at the same time, as companies pumping from the Permian basin in Texas overcame pipeline bottlenecks to move their oil to the Gulf coast.

These increases, alongside smaller downward revisions to demand growth forecasts and President Trump's decision to grant sanctions waivers to buyers of Iranian oil, have flipped market sentiment from fears of a supply shortage to concerns about a glut in the space of three months. Oil stockpiles in the developed nations of the OECD, which had been falling since early 2017, are rising again and are likely to exceed their five-year average level when October data are finalized, according to the International Energy Agency.