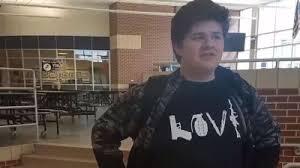 Schoenecker was told that he could not wear T-shirts that either depict weapons or even mention the word "gun." The school dress code bans

Likely unconstitutional, said U.S. District Judge Lynn Adelman, in Schoenecker v. Koopman, decided Friday, granting a preliminary injunction blocking the school from enforcing the rule against Schoenecker. The T-shirts contain presumptively protected speech, the judge held, notwithstanding the school's argument that the first two shirts "do not convey specific, unambiguous messages." Because the images on the shirts "are pure speech, in that they contain images and words that convey a message," they are presumptively covered by the First Amendment even if they are "ambiguous and open to interpretation," and lack "a narrow, succinctly articulable message."

To show that he reasonably believed that the T-shirts would be likely to cause substantial disruption, the defendant [principal] cites the following facts. First, he states that staff members working at the school told him that the shirts "made them uncomfortable and concerned about school safety," especially because the plaintiff wore the shirts shortly after the shooting at Marjory Stoneman Douglas High School in Parkland, Florida. Second, he notes that some students at Markesan High School participated in a walkout to protest school gun violence and to remember the 17 victims killed in the Parkland shooting, and that some Markesan students in general are concerned about a shooting occurring at their school. Third, the defendant states that "class instruction was disrupted on multiple occasions due to student discussions and arguments about the [plaintiff's] shirts." Finally, the defendant states that, after the plaintiff filed this lawsuit and news outlets came to the school to interview him, students became distracted by the news crews and had disruptive discussions during class about the media presence.