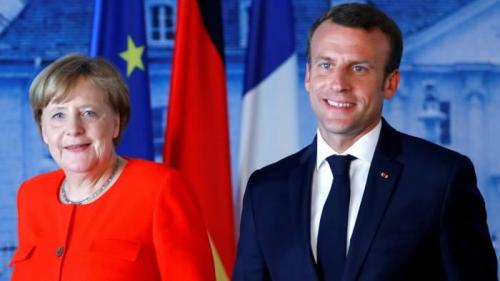 (Natural News) POTUS Donald Trump may go down in history as the U.S. president who exposed the European Union for what it has become since the end of the Cold War: A gaggle of ungrateful, Left-wing pretenders who have taken advantage of American generosity for decades.

Following in the footsteps of French President Emmanuel Macron, German Chancellor Angela Merkel is channeling her monstrous predecessor, Adolph Hitler, in calling for a European army so the European Union can fulfill his objective of conquering the continent while getting rid of the United States military presence there.

In a speech in Strasbourg, Merkel called for a "real, true" EU army in what was seen as a direct rebuke to POTUS Trump, the U.K.'s Daily Mail reported.

In addition, Merkel called for the creation of a European Security Council which would be responsible for developing and coordinating defense policy throughout the alliance.

But wait — what about NATO? Germany and most of the EU are all members. Why not just strengthen NATO? Well, Merkel explained, the new EU army would certainly work in conjunction with the longstanding alliance, adding that "only a stronger Europe is going to defend Europe."

Continuing, Merkel declared, "Europe must take our fate into our own hands if we want to protect our community."

Is that true, though? Hardly. NATO's reason for existence is to defend alliance members, which is to say virtually all of the continent. It's hard to imagine that NATO would not come to the defense of non-members like Sweden, Finland, and Norway, for that matter. (Related: Russia may have just practiced going to war with NATO.)

Just days ago, Macron made similar remarks. In an interview with Europe 1, he talked about renewed Russian aggression and POTUS Trump's decision to withdraw from the Intermediate Range Nuclear Forces (INF) Treaty.

"I believe in the project of a sovereign Europe. We won't protect Europe if we don't decide to have a true European army," he said, as the Daily Mail reported. "We have to have a Europe that can defend itself alone — and without only relying on the United States in a more sovereign manner.