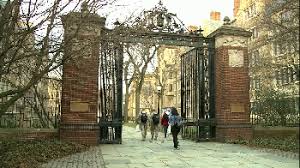 If you are a top ability student, but white, especially white male, you have scant chance of being admitted to Harvard, Yale, Princeton, Columbia, Dartmouth, Cornell, Brown, Penn, Stanford, MIT, CalTech, Berkeley, or UCLA.

The reason whites cannot gain admission is that in the entirety of the Ivy league, Jews are over-represented, relative to the pool of high ability students, by 381%. High ability Asians are under-represented at 62%, and non-Jewish whites are most under-represented of all with a presence in the Ivy League of only 35% of their presence in the pool of high ability students. The Asians are suing Harvard for discrimination, but any such action by whites would be dismissed as an act of "white supremacy."

At MIT and Stanford, Jews are also over-represented. At CalTech it is Asians, and at Berkeley and UCLA it is a combination of Jews and Asians. The over-representation is with reference to the pool of high ability students. Equally or better qualified whites are passed over in favor of admission of others.

These are the conclusions of Ron Unz.

Unz reports that in the past three decades, at Harvard "the presence of white Gentiles has dropped by as much as 70 percent, despite no remotely comparable decline in the relative size or academic performance of that population; meanwhile, the percentage of Jewish students has actually increased. This period certainly saw a very rapid rise in the number of Asian, Hispanic, and foreign students, as well as some increase in blacks. But it seems rather odd that all of these other gains would have come at the expense of whites of Christian background, and none at the expense of Jews."

It couldn't be more clearly stated that in America white Gentiles are being excluded from the universities that create the elites.