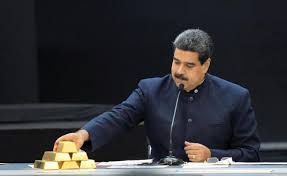 However, the BOE has refused to release the precious metal, citing money laundering rules and the bank's fear that Maduro will seize the gold, which is owned by the state, and sell it for personal gain.  The BOE's denial of Maduro's request to return Venezuela's property shows that if you don't hold it, you don't own it.  Over 30 nations have gold holdings in BOE vaults. No gold for you! The Bank of England has refused to give Venezuela its gold back. Wait until you read the reason why…

Earlier in the week I reported on Venezuela's request to repatriate its 14 tons of gold held in Bank of England vaults.

We have an update to that request, from The Times (bold added for emphasis):

President Maduro of Venezuela is trying to repatriate at least 14 tonnes of gold held at the Bank of England, fearing that access could be frozen under US sanctions against his regime.

The Bank has refused to release the gold bars, worth about £420 million, according to sources. British officials are understood to have insisted that standard measures to prevent money-laundering be taken — including clarification of the Venezuelan government's intentions for the gold.

There are concerns that Mr Maduro may seize the gold, which is owned by the state, and sell it for personal gain.

So there you have it. Nicolas Maduro, according to the Bank of England, "may seize the gold…and sell it for personal gain".