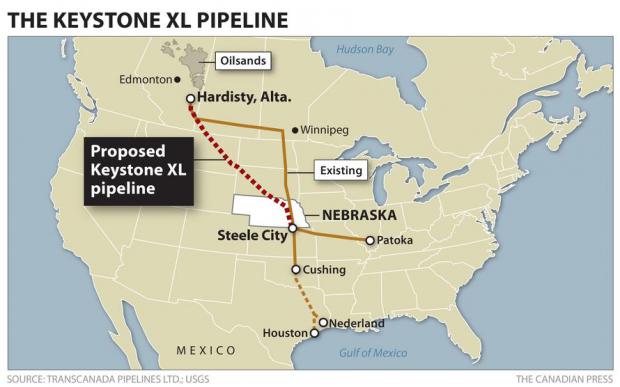 In a setback for the Trump administration, a federal judge in Montana temporarily halted construction of the Keystone XL oil pipeline late on Thursday on the grounds that the U.S. government did not complete a full analysis of the environmental impact of the TransCanada Corp project and failed to justify its decision granting a permit for the 1,200-mile long project designed to connect Canada's tar sands crude oil with refineries on the Texas Gulf Coast. The ruling came in a lawsuit that several environmental groups filed against the U.S. government in 2017, soon after President Donald Trump announced a presidential permit for the project.

The judge, Brian Morris of the U.S. District Court in Montana, said President Trump's State Department ignored crucial issues of climate change in order to further the president's goal of letting the pipeline be built. In doing so, the administration ran afoul of the Administrative Procedure Act, which requires "reasoned" explanations for government decisions, particularly when they represent reversals of well-studied actions.

Morris wrote that a U.S. State Department environmental analysis "fell short of a 'hard look'" at the cumulative effects of greenhouse gas emissions and the impact on Native American land resources.  He also ruled the analysis failed to fully review the effects of the current oil price on the pipeline's viability and did not fully model potential oil spills and offer mitigations measures.

However, the decision does not permanently block a pipeline permit. It requires the administration to conduct a more thorough review of potential adverse impacts related to climate change, cultural resources and endangered species. The court essentially ordered a do-over.

Morris, a former clerk to the late Chief Justice William Rehnquist, was appointed to the bench by President Obama.

The ruling is a victory for environmentalists, tribal groups and ranchers who have spent more than a decade fighting against construction of the pipeline that will carry heavy crude to Steele City, Nebraska, from Canada's oilsands in Alberta.