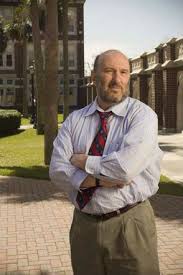 A former student of mine has made a generous contribution to fund the Walter E. Block Scholarship at the level of $25,000 each year. Several students interested in studying the economics of free enterprise who enroll at Loyola can benefit. These funds would serve as an incentive, on top of other scholarships that Loyola otherwise awards.

A major reason: all four members of the economics department study the economics of the free market.  That includes me, plus William Barnett II, John Levendis, and Leo Krasnozhon. In addition, Nick Capaldi teaches business ethics from a similar point of view, as do David Gruning and James Viator at the law school. As a result, a solid core of professors will be your primary resource. We have gathered about us a group of Loyola students, faculty and students from next door Tulane, and several community members. So, if you enroll here, you can join a group of supporters of libertarianism and free enterprise.

Moreover, students and other members of the academic community and beyond regularly meet to dig into the topic beyond the classroom. Finally, outside speakers (often academic economists early in their careers) often speak to the students and faculty in the department.

In short, Loyola is a great place to study the economics of the free market! You owe it to yourself to check us out. Do apply for the Walter E. Block Scholarship as well as other Loyola sources of financial support.

Block, Walter E. 2008. "Attention Students: Should You Get Your Ph.D. and Become a Professor?" June 28; (debate with Gary North)

If you are interested in applying for this scholarship, do two things. One, apply to enroll or transfer to Loyola, through ordinary channels. Two, write me a short note (less than 1000 words), explaining why you are a good candidate for this scholarship.

The Best of Walter E. Block

The cult of Kanye:

A Growing Number of Catholic Schools Are Shutting Down Forever