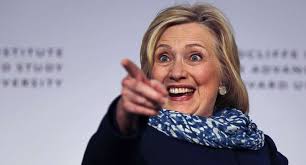 The mainstream media can hardly keep quiet over suggestions that Republicans are nasty racists — but when one of their beloved Democrat's makes a vile, racist comment, they go radio silent.

Former Secretary of State Hillary Clinton is spacing major backlash after making an reference to all African Americans looking alike.

She let loose with the racist phrase last Friday during an interview with Kara Swisher of Recode, and the mainstream media has not pushed back at all.

Swisher asked about Booker, referencing a comment she thought he made about Democrats needing to track down Republicans and "kick 'em."

Booker actually told Democrats to "get in the face of some Congresspeople"—and instead, it was former Obama administration Attorney General Eric Holder who said to "kick" Republicans.

"That was Eric Holder," Clinton said, obviously upset at the question.

"Yeah, I know they all look alike," Hillary responded.

Both Booker and Holder are African-American – and Clinton's ugly comparison was as clear as day.

"No, they don't," Swisher said, before saving Hillary's reputation by telling her, "well done."

Hillary may have been trying to humiliate Swisher for asking an embarrassing question about Hillary's support for someone who incited violence, but saying that all blacks look alike is a time-worn racial slur.

"If this was a Republican, male or female, they are finished," Rush Limbaugh said.

FIND THE BEAUTY IN THE CHAOS: BYRNE, BERGY & HRC BOMBSHELL