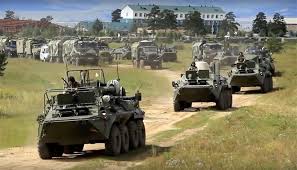 As 50,000 NATO troops mass in Scandinavia for the military alliance's annual "Trident Juncture" military exercises, an annual affair that has been expanded to become the largest NATO exercise since the end of the Cold War in reflection of the deepening hostilities with Russia, it appears President Vladimir Putin has decided to flex some military muscle of his own.

As Radio Free Europe reports, the Russian Navy has alerted NATO that it is planning to test missiles in international waters off Norway's coast this week. And while the missiles Russia will be testing aren't of the hypersonic variety that Russia is planning to introduce in the coming years, NATO commanders will undoubtedly seize on Russia's decision to help justify even more aggressive displays of military force in the future.

For what it's worth, NATO Secretary-General Jens Stoltenberg tried to play down the missile tests as part of routine activity by the Russian military.

"Russia has a sizable presence in the north, also off Norway," Stoltenberg told the Norwegian news agency NTB.

Russian officials did not immediately comment on the planned missile tests, which come amid persistent tension between NATO and Russia, which seized Crimea from Ukraine in 2014 and backs separatists in an ongoing conflict in eastern Ukraine but accuses the alliance of provocative behavior near its borders.

A spokesman for Avinor, the organization that operates Norwegian airports and air-navigation services, told RFE that Russia had informed them about the tests in a NOTAM (a type of "routine message" to pilots about potential hazards along a flight route). The tests are set to take place between Nov. 1 and Nov. 3 west of the coastal cities of Kristiansund, Molde, and Alesund.

Norway also tried to play down the significance of the Russian missile tests.

"There is nothing dramatic about this. We have noted it and will follow the Russian maneuvers," Norwegian Defense Minister Frank Bakke-Jensen said.

The Trident Juncture exercises began Oct. 25, and are expected to run through Nov. 7. They will involve around 50,000 soldiers, 10,000 vehicles, and more than 300 aircraft and ships from all 29 NATO allies, as well as "non-aligned" Finland and Sweden. The exercises will stretch from the North Atlantic to the Baltic Sea to test the alliance's ability to respond to an attack on the Baltics (as the Baltic states grow increasingly nervous that Russia might attempt an annexation similar to what occurred in the Crimea).