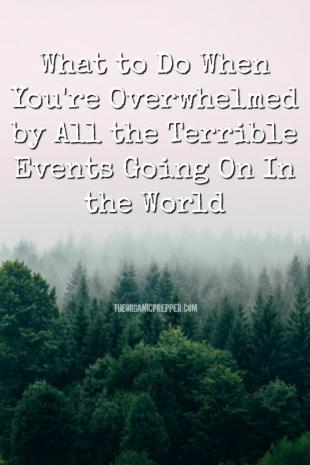 There are so many terrible things happening. Massacres in places of worship. Thousands of people heading to the US all at once, demanding to be let in. Bombs being sent through the mail. A heated election cycle that is only a glimpse of the coming presidential election. One horrific crime after another.

And at the foundation of everything is hatred.

The venomous things that people are saying to one another all in support or rejection of these dreadful occurrences are the most dangerous part of it all.

If you're a peace-loving person who just wants to get along with his or her fellow American, all of this stuff can be enough to make you want to crawl under the nearest rock, preferably a rock without Wi-Fi or a cell signal.

When you spend your days engrossed in the news

Sometimes I get emails from people who wonder how I can write about the things I do and still remain upbeat.

I've been working in the alternative news industry since 2011. There have been days at I time I was glued to my laptop covering manhunts, constitutional insults, or scenes of horror. It would be a lie (not to mention rather unhinged) to say that I was unmoved by it all.

Sometimes I ended the day with such awful scenes playing through my head that my night was filled with restless nightmares replaying all that I had learned. Sometimes the last thing I wanted to do the next morning when it was time to start work was switch on that laptop and see the most recent gruesome act of hatred humans had perpetrated on one another.

But here I am, eight years later, still doing it. Still trying to make sense of it all and write things that pull people together instead of tearing them apart. Still looking for that common thread that runs between us all and hoping that more people grab onto that instead of trying to sever it.

And most of the time, I'm okay. Most of the time, I can keep from becoming terribly depressed by the awful things about which I spend my days researching and writing. I can share with you a few of the ways that I prevent the bad news from causing so much anxiety that I want to throw my laptop in the lake and live out the rest of my days, blissfully uninformed.

How can you handle the mental toll of terrible events?

First of all, stop thinking that you're being weak or fragile by being bothered by these horrific events. I've seen people commenting that they aren't "tough" enough to handle all of the awful things we're being bombarded with by the media.

It has nothing whatsoever to do with toughness, weakness, or fragility. If you are a caring human being, of course these things get to you. It's natural and, bonus, a sign that you aren't a sociopath. This isn't to say that people who can put some mental distance between themselves and the events are unstable – it is just to say that there is nothing wrong or weak about those who are overwhelmed by it.