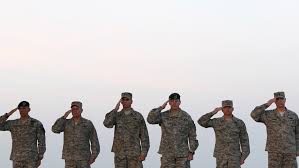 "The hawks always hide behind the enlisted men with all of their arguments for any intervention and [say] the only way to support the troops is to support their policy," he said. "That's frankly just wrong, especially in the United States of America where it's supposed to be a limited constitutional republic."

Horton spoke at an event hosted by the Committee for Responsible Foreign Policy, a non-partisan organization that advocates for a restrained foreign policy.

He said when Americans join the military, they trust their leaders will only send them on missions that endanger their lives when it is absolutely necessary and to fight for the country's freedom.

"That's what they are told they're volunteering for – not to implement the grand strategy of some egghead at a think-tank who's never been in a fight in his life, and who has a great plan for offensive war against people who've never attacked us," he said.