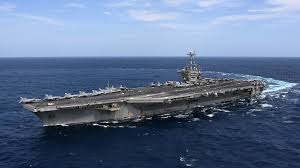 Nuclear-powered carrier USS 'Harry S. Truman' will operate in the Norwegian Sea to display "the flexibility and toughness" of US forces, the Navy stated on Friday. A ship of its type hasn't conducted voyages into Arctic waters since 1991, and hasn't shown up near Norwegian shores since 1987.

"It has been over three decades since carrier aviation has been tested by this environment."

Dienna said that the ship's presence in the region showcases "a full spectrum of capabilities to bear anywhere in the world."

USS 'Harry S. Truman' is also set to join the massive NATO drill, Trident Juncture 2018, which is scheduled to take place from October 25 to November 7. The upcoming exercise will be the largest of its kind since the end of the Cold War, involving more than 50,000 troops, 65 ships and around 250 aircraft.