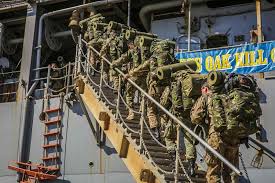 But a growing number of those young men and women face a much different post-graduation interlude: military service.

After the Cold War, many European countries abolished conscription, considering it an expensive relic. But with Russia resurgent and tensions on the rise, mandatory military service is making a comeback across the continent. This year, Sweden drafted its first new class of conscripts since abolishing the draft in 2010. Lithuania has also reinstated conscription, and Norway began drafting women for the first time in 2016.

Meanwhile, lawmakers in Italy, Romania and Germany have debated reintroducing some form of conscription in recent months. French President Emmanuel Macron is pushing for the introduction of a national service program that would include a military option and last between one month and a year. And there are no signs that Denmark, Estonia, Finland, Cyprus, Greece, Austria or Switzerland will get rid of their conscription systems anytime soon.