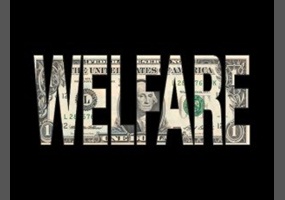 One of the more elementary observations about economics is that a nation's prosperity is determined in part by the quantity and quality of labor and capital. These "factors of production" are combined to generate national income.

I frequently grouse that punitive tax policies discourage capital. There's less incentive to invest, after all, if the government imposes extra layers of tax on income that is saved and invested.

Bad tax laws also discourage labor. High marginal tax rates penalize people for being productive, and this can be especially counterproductive for entrepreneurship and innovation.

Still, we shouldn't overlook how government discourages low-income people from being productively employed. But the problem is more on the spending side of the fiscal equation.

The Welfare State's Effect on the Poor

During the 20 years before the War on Poverty was funded, the portion of the nation living in poverty had dropped to 14.7% from 32.1%. Since 1966, the first year with a significant increase in antipoverty spending, the poverty rate reported by the Census Bureau has been virtually unchanged…Transfers targeted to low-income families increased in real dollars from an average of $3,070 per person in 1965 to $34,093 in 2016…Transfers now constitute 84.2% of the disposable income of the poorest quintile of American households and 57.8% of the disposable income of lower-middle-income households. These payments also make up 27.5% of America's total disposable income.

This massive expansion of redistribution has negatively impacted incentives to work:

The stated goal of the War on Poverty is not just to raise living standards but also to make America's poor more self-sufficient and to bring them into the mainstream of the economy. In that effort the war has been an abject failure, increasing dependency and largely severing the bottom fifth of earners from the rewards and responsibilities of work…The expanding availability of antipoverty transfers has devastated the work effort of poor and lower-middle income families. By 1975 the lowest-earning fifth of families had 24.8% more families with a prime-work age head and no one working than did their middle-income peers. By 2015 this differential had risen to 37.1%…The War on Poverty has increased dependency and failed in its primary effort to bring poor people into the mainstream of America's economy and communal life. Government programs replaced deprivation with idleness, stifling human flourishing. It happened just as President Franklin Roosevelt said it would: "The lessons of history," he said in 1935, "show conclusively that continued dependency upon relief induces a spiritual and moral disintegration fundamentally destructive to the national fiber."