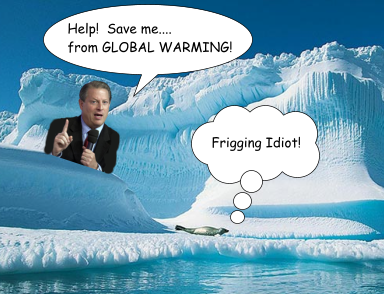 Nobody does a better job of proving Mark Twain's maxim than Al Gore.

"It's better to keep your mouth shut and appear stupid than open it and remove all doubt."

His latest example was reported in an article here at Technocracy News titled,

The only thing getting "Loopier and Wavier" is Gore's pronouncement. Every time he makes them he proves how little he knows about climatology and the way the Earth's atmosphere and weather systems work. We have known about the mechanisms he doesn't know about for his entire 70-year lifetime.

Just a few minutes looking at any first-year climatology text would explain. It would show that he is talking about Rossby Waves in the Circumpolar Vortex (Jet Stream) and they are normal events. Carl-Gustaf Rossby identified them in the late 1940s. This came after pilots trying to bomb Japan during WWII discovered the Jet Stream. They didn't think they could get from the Pacific Islands to Tokyo and back. Luckily, they flew one of the first pressurized bombers, the B29 Superfortress, an aircraft that could reach the level of these high altitude winds. They flew low one way and high the other to complete a mission that did limited damage but was of enormous consequence to the belief of invulnerability of the Japanese people and a huge boost of morale for the Allies.

The following is a brief explanation of the atmospheric mechanisms Gore claims are new and unnatural. The atmosphere is divided into two by a boundary that marks the point at which the amount of energy coming in from the Sun equals the amount of energy going back to space (Figure 1). It and the other diagrams were in my university textbook first published in 1989. This boundary is known as the point of Zero Energy Balance (ZEB). Notice the pattern is different between the Northern and Southern Hemispheres, primarily because the North is 39% land and 61% ocean.  In the South, the ratio is 19% land and 81% ocean.

The ZEB moves with the seasons, so the boundary moves toward or away from the Equator as the dome of cold air expands and contracts (Figure 2). 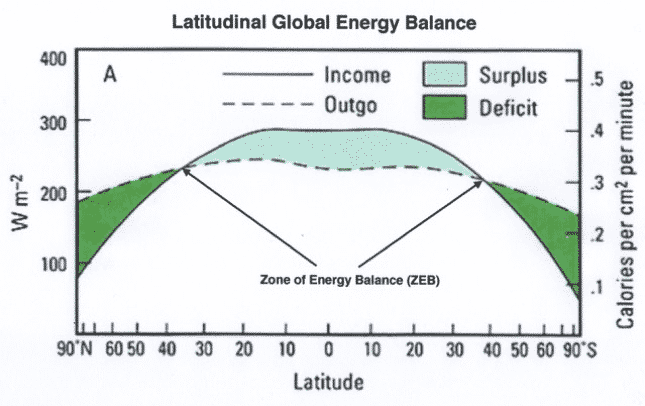