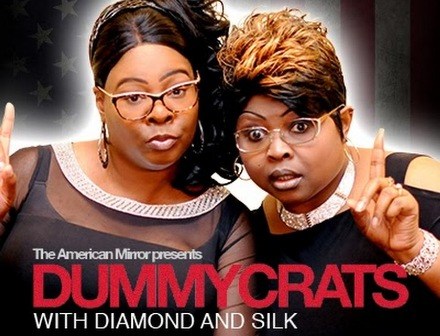 This movie is only playing in specific locations, all at the same time across the country. America has only one day to see the movie and that day would be today, October 15, 2018.

Please look at the following movie trailer. You are looking at two conservative ladies who call themselves "Diamond and Silk". They represent free-thinking, intelligent, freedom-loving Americans, only with a twist. Quite obviously they are Black. However, they are tired of being taken for granted by the Democratic Party.They refer often to the plantation politics of the Democratic Party that they feel has taken Black people for granted. Their views align somewhat with Kanye West who is protesting the fact that the left is trying to lock all Black people into one ideology, wealth redistribution. Diamond and Silk want freedom of choice, not a handout. They want opportunity, not a guarantee. The hard core nature of their message is softened by their amazing ability to make people laugh.

Diamond and Silk refuse to be told what to think by the "plantation masters" of the Democratic Party. Sixty years of promises have yielded nothing of substantial economic gain for Black Americans. Trump has accomplished more for Blacks economic recovery in two years than the Democratic Party since the Civil Rights movement began. For over three generations, Black people have pledged their support and undying loyalty to a political party that needs their collective votes in order to remain a viable political entity.

I previously covered the fact that CNN aired racially offensive material in relation to Kanye West, a Black man who refuses to be controlled by the Dummycrats. CNN responded with race-based hatred statements such as, "Kanye West is Trump's token Negro" and "Kanye West Is a an example of what happens when a  Negro is not taught to read"….. CNN should really think about changing their name to the Jim Crow Network as these racially insensitive remarks should offend every reasonable American.

Diamond and Silk are not just examples of how Black people are breaking free of the mind-control system of the Democratic Party. They represent what all Americans should do, learn to think for themselves. See you at the movies and watch out for Antifa!

The Dummycrats of the Day: Elizabeth Warren and Kamala Harris

Elizabeth Warren, the Trojan Horse of the Middle Class. She and Senator Kamala Harris are Muslim Brotherhood sympathizers. I am not talking Muslims or the religion of Islam, I am referring to the most senior terrorist group in the world, the Muslim Brotherhood. These 2 belong to their front organizations for the Muslim Brotherhood and the American Communist Party. Trevor Louden has fully exposed this in his new documentary, The Enemies Within. Over 80 Democrats in Congress fit this MO. And now you know why they had a tantrum when Trump said, last night that there are consequences to illegal  immigration and that America is going  screen immigrants who come from a part of the world that rightfully hates America. Does this fit the definition of treason? Why do Warren and Harris care if immigrants are screened? They both want totally open borders.

These two Dummycrats  want to abolish ICE and allow unfettered drug dealer access to every American community with impunity and without interference. They also want the government to seize ALL big business. They favor the elimination of private property, except their own. They hate the Constitution and traditional values and they both embrace every perversion known to mankind. Under their leadership, America is becoming a cesspool. Warren and Harris embrace the politics of Soros (former Nazi Collaborator) and Karl Marx. They are two of the leaders of America's version of the Bolshevik Revolution. If you are a Christian conservative, these two Dummycrats want to destroy your life.