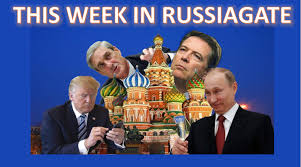 As the hoax unravels, the real story of "foreign collusion" comes out...

The conspiracy to overthrow a sitting US President extends far beyond our own "Deep State."

As I've been saying in this space for quite some time, it's been an international team effort from the beginning. Setting aside the British origins of the obscene "dossier" compiled by "ex"-MI6 agent Christopher Steele, we now have further confirmation of foreign involvement in President Trump's decision to delay (perhaps indefinitely) the declassification of key Russia-gate documents. While US intelligence officials were expected to oppose the move, "Trump was also swayed by foreign allies, including Britain, in deciding to reverse course, these people said. It wasn't immediately clear what other governments may have raised concerns to the White House."

But of course the Washington Post knows perfectly well which other governments would have reason to raise "concerns" to the White House. It's clear from the public record that the following "allies" have rendered the "Resistance" essential assistance at one time or another:

United Kingdom – This entire episode has Her Majesty's Secret Service's fingerprints all over it. Steele's key role is plain enough: here was a British spook who was not only hired by the Clinton campaign to dig up dirt on Trump but was unusually passionate about his work – almost as if he'd have done it for free. And then there was the earliest approach to the Trump campaign, made by Cambridge professor and longtime spook Stefan Halper to Carter Page. And then there's the mysterious alleged "link" to Russian intelligence, Professor Joseph Mifsud, whose murky British-based thinktank managed to operate openly despite later claims it was a Russian covert operation.

It was Mifsud who orchestrated the Russia-gate hoax, first suggesting that the Russians had Hillary Clinton's emails, and then disappearing into thin air as soon as the story he had planted percolated into plain view. Some "Russian agent"!