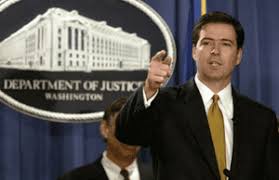 The vast regime of torture created by the Bush administration after the 9/11 attacks continues to haunt America. The political class and most of the media have never dealt honestly with the profound constitutional corruption that such practices inflicted. Instead, torture enablers are permitted to pirouette as heroic figures on the flimsiest evidence.

Former FBI chief James Comey is the latest beneficiary of the media's "no fault" scoring on the torture scandal. In his media interviews for his new memoir, A Higher Loyalty: Truth, Lies, and Leadership, Comey is portraying himself as a Boy Scout who sought only to do good things. But his record is far more damning than most Americans realize.

Comey continues to use memos from his earlier government gigs to whitewash all of the abuses he sanctified. "Here I stand; I can do no other," Comey told George W. Bush in 2004 when Bush pressured Comey, who was then Deputy Attorney General, to approve an unlawful anti-terrorist policy. Comey was quoting a line supposedly uttered by Martin Luther in 1521, when he told Emperor Charles V and an assembly of Church officials that he would not recant his sweeping criticisms of the Catholic Church.

The American Civil Liberties Union, Human Rights Watch, and other organizations did excellent reports prior to Comey's becoming FBI chief that laid out his role in the torture scandal. Such hard facts, however, have long since vanished from the media radar screen. MSNBC host Chris Matthews recently declared, "James Comey made his bones by standing up against torture. He was a made man before Trump came along." Washington Post columnist Fareed Zakaria, in a column declaring that Americans should be "deeply grateful" to lawyers such as Comey, declared, "The Bush administration wanted to claim that its 'enhanced interrogation techniques' were lawful. Comey believed they were not…. So Comey pushed back as much as he could."

Martin Luther risked death to fight against what he considered the scandalous religious practices of his time. Comey, a top Bush administration policymaker, found a safer way to oppose the worldwide secret U.S. torture regime widely considered a heresy against American values: he approved brutal practices and then wrote some memos and emails fretting about the optics.

Comey became deputy attorney general in late 2003 and "had oversight of the legal justification used to authorize" key Bush programs in the war on terror, as a Bloomberg News analysis noted. At that time, the Bush White House was pushing the Justice Department to again sign off on an array of extreme practices that had begun shortly after the 9/11 attacks. A 2002 Justice Department memo had leaked out that declared that the federal Anti-Torture Act "would be unconstitutional if it impermissibly encroached on the President's constitutional power to conduct a military campaign." The same Justice Department policy spurred a secret 2003 Pentagon document on interrogation policies that openly encouraged contempt for the law: "Sometimes the greater good for society will be accomplished by violating the literal language of the criminal law."