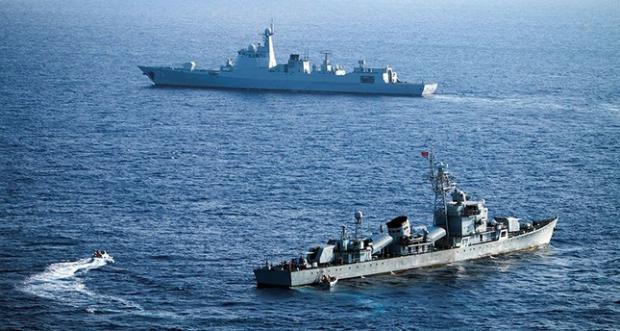 Dramatic photos have emerged of a confrontation we reported on Monday between the USS Decatur and the Chinese destroyer Luyang, which came within 45 yards of each other in the South China Sea. The photos of the two warships, obtained by gCaptain, reveal the "unsafe and unprofessional maneuver" that almost resulted in a collision "in the vicinity" of the Graven Reef in the Spratley Islands on Sunday morning at 8:30 a.m..

According to a Navy spokesman, during the incident, the Chinese warship "approached within 45 yards of Decatur's bow, after which Decatur maneuvered to prevent a collision."

As was reported over the weekend, the USS Decatur on Sunday conducted the U.S. Navy's latest freedom of navigation operation in the South China Sea, coming within 12 nautical miles of the Gaven and Johnson Reefs claimed by China. -gCaptain

On Tuesday, China accused the US of violating its "indisputable sovereignty" over the Spratley islands, saying in a statement "We strongly urge the U.S. side to immediately correct its mistake and stop such provocative actions to avoid undermining China-U.S. relations and regional peace and stability."

It is unclear how the photos were obtained, however they were deemed to be legitimate according to Stars and Stripes, citing a US Navy official.

The encounter, which comes at a time of strained relations between the world's two largest economies driven largely by Trump's aggressive trade policy, was characterized as "unsafe and unprofessional" by Navy officials.

"At approximately 0830 local time on September 30, a PRC LUYANG destroyer approached USS DECATUR in an unsafe and unprofessional maneuver in the vicinity of Gaven Reef in the South China Sea," said Capt. Charlie Brown, a U.S. Pacific Fleet Spokesman.

Gaven Reef is located in the Spratly Islands chain in the South China Sea where China claims seven man-made islands as its own.

The close encounter with the Chinese warship occurred as the American destroyer was carrying out a freedom of navigation operation (FONOPs) in the Spratlys, the U.S. said.

USS Decatur had sailed within 12 nautical miles of Gaven and Johnson Reefs in the Spratly Islands when it was approached by the Chinese destroyer.

World Robot Conference kicks off in Beijing with a robot nurse...