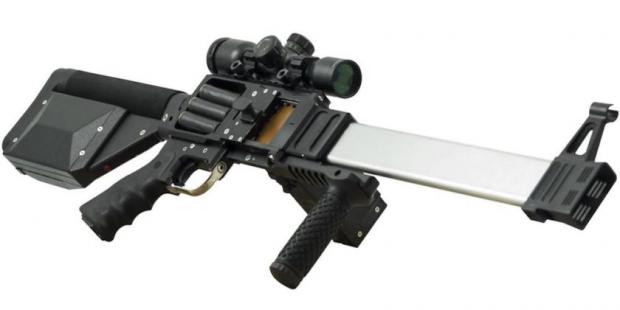 The Army adopted its battle rifle in 1963 and has spent 55 years looking for a replacement for the M-16 and its variants.

They might have found it in Martin Grier's Colorado Springs garage. Grier, a self-described inventor who has worked at a local bed and breakfast, built the new "ribbon gun" with a hobbyist's tools. It looks like a space-age toy drawn by a fifth-grader.

But goofy origins and cartoon-looks aside, this could be the gun of the future. The Army is studying Grier's gun and has ordered a military-grade prototype.

The specifications are incredible, four 6 mm barrels cut side by side within one steel block. New ammunition blocks fired by electromagnetic actuators that could theoretically give the weapon a firing rate of 250 rounds per second.

And then there's the feature no soldier would turn down. "It's called a power shot," Grier said.

That's the shotgun feature of this sniper-shot, machine-assault gun that can send four bullets simultaneously whizzing toward an enemy at more than 2,500 mph.

It isn't science fiction. He's built the gun and patented the technology behind it. Now his garage-based company, FD munitions, is hoping the Army will buy it.