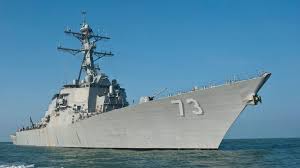 The close encounter that the U.S. Navy characterized as "unsafe and unprofessional" comes at a time of heightened tensions between the United States and China.

"At approximately 0830 local time on September 30, a PRC LUYANG destroyer approached USS DECATUR in an unsafe and unprofessional maneuver in the vicinity of Gaven Reef in the South China Sea," said Capt. Charlie Brown, a U.S. Pacific Fleet Spokesman.

Gaven Reef is located in the Spratly Islands chain in the South China Sea where China claims seven man-made islands as its own.

The close encounter with the Chinese warship occurred as the American destroyer was carrying out a freedom of navigation operation (FONOPs) in the Spratlys, the U.S. said.

USS Decatur had sailed within 12 nautical miles of Gaven and Johnson Reefs in the Spratly Islands when it was approached by the Chinese destroyer.

The Chinese Navy "destroyer conducted a series of increasingly aggressive maneuvers accompanied by warnings for DECATUR to depart the area," Brown added.