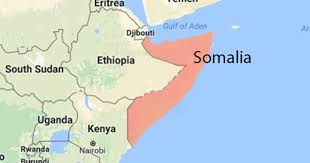 Somalia is a country on Africa's east coast. Most people don't know anything about the place, other than that it's infamous for pirates.

But that's not the only thing that makes it "special." You see, Somalia is also one of the only countries that doesn't have an army.

Now, I couldn't decide if Somalia was better or worse off because of this. So, I called up Doug to get his take…

Justin: Somalia doesn't have an army. Is this a good thing or not, Doug?

Doug: I've spent a fair amount of time around Africa, but I haven't been to Somalia. So I can't make firsthand comments about the place. Neither can many other people—it's risky and dangerous to travel to Somalia, and it has few attractions.

All that most people know about Somalia is what they learned in the movie , about an episode in the pointless and catastrophic 1993 US intervention in their civil war.

I subscribe to Foreign Affairs, which is the mouthpiece of the Council on Foreign Relations. I was drawn to one article because the author came across as shocked that Somalia doesn't have an army. Nothing new—the magazine is full of bad ideas, but I like to know what the Establishment is thinking. The author recommended that Europeans or Americans should come in and train an army for Somalia. Which is an idiotic idea. Maybe even goofier than keeping the 25,000 "peacekeepers" from a half-dozen African countries there. You can be sure the current "peacekeepers" mainly shake down local merchants, molest the local females, and get in bar fights. African armies are all, without exception, just armed mobs wearing uniforms.

The purpose of an army is to protect the people of one country from other governments outside its borders. However nobody's looking to conquer or attack Somalia—there would be zero profit in it. Although it's probably the most homogeneous state on the continent, it's a total failed state. It produces nothing—just subsistence agriculture, bandits, and pirates. Its only export is hundreds of thousands of migrants, mainly to the US, the UK, Canada, and Scandinavia. They bring their bad habits with them.

An Undertaker Explains How the Depopulation Project Is Working