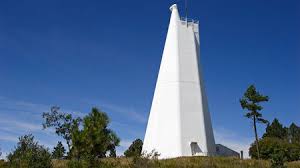 The solar observatory that was dramatically closed down last week has reopened, but they still haven't really explained what happened despite the release of a lengthy statement.

Who else has a ton of questions about the facility that was closed down abruptly last week by federal agents arriving in Blackhawk helicopters? The Sunspot Solar Observatory has been at the top of Sacramento Peak ever since 1947. It's in Sunspot, New Mexico, in Otero County. And on Sept. 6 every person there was evicted evacuated by the FBI.

No one knew why it was closed, nor did they know why nearby post offices were also suddenly shut down.

On Sept. 6, the Sunspot Solar Observatory was suddenly closed by the Association of Universities for Research in Astronomy, the consortium that operates it, without public explanation.

People who work at the observatory, and those who live on the site, were asked to evacuate. The site's post office was also closed.

The Otero County sheriff told the local newspaper that his office was alerted but not given any information.

"The FBI is refusing to tell us what's going on," Sheriff Benny House told the Alamogordo Daily News shortly after the closure. "We've got people up there (at Sunspot) that requested us to standby while they evacuate it. Nobody would really elaborate on any of the circumstances as to why. The FBI were up there. What their purpose was nobody will say."

"But for the FBI to get involved that quick and be so secretive about it, there was a lot of stuff going on up there," he added. "There was a Blackhawk helicopter, a bunch of people around antennas and work crews on towers but nobody would tell us anything." (source)

Of course, the internet exploded with theories about aliens, solar events, the rogue planet Niribu, and all sorts of imminent doom. Paging Fox Mulder.

There was a YouTube video that said 6 other observatories were suddenly closed, but I was unable to confirm any of these except the one in New Mexico. This doesn't mean it didn't happen or that it did and was hidden from us. It just means that, as I said, I could not confirm this claim.

And now the Sunspot Observatory has reopened.

The site reopened 11 days after the mysterious closure.

The reasons that the facility closed are still vague, although they swear it wasn't about aliens.

AURA officials had previously cited a "security issue" as the cause of the closure (which also affected a nearby post office) but did not elaborate. The FBI was apparently involved but kept pretty much everyone, including local law enforcement, in the dark about what was going on.

As often happens, rumors rushed in to fill the information-free void. Speculation ranged from the ridiculous (that the government wanted to squash news of an alien-life detection or civilization-destroying solar flare) to the plausible (that some bad actor had planted spy gear on the Sunspot grounds, which provide a good view of the White Sands Missile Range and Holloman Air Force Base).

That latter explanation may still be in play; AURA has not disclosed the nature of the criminal activity being investigated. (source)