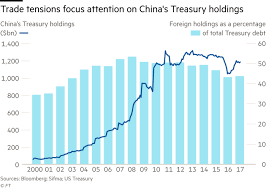 (Bloomberg) -- China's holdings of U.S. Treasuries fell to a six-month low in July, just as a trade war between the world's two largest economies began heating up.

China's ownership of U.S. bonds, bills and notes slipped to $1.17 trillion, the lowest level since January and down from $1.18 trillion in June, according to data released by the Treasury Department on Tuesday. Japan, the largest foreign investor in Treasuries after China, increased its holdings, as did Saudi Arabia, Taiwan, Singapore and France.

The first salvos in the U.S.-China trade conflict were fired on July 6, when the Trump administration activated tariffs on $34 billion of Chinese goods, which sparked immediate in-kind retaliation from Beijing. The escalation caused the yuan to drop roughly 2 percent in July, suggesting that the Asian nation shed U.S. bonds as a way to sell dollars and support its currency, according to NatWest Markets.

"It doesn't surprise me, given the weakening of the yuan over the course of the month of July," said John Briggs, head of strategy for the Americas. "They could be diversifying their holdings, of course, but that could be the reason."

The tit-for-tat tariff battle has since widened, with each country imposing duties on another $16 billion of goods and the U.S. slated to hit a further $200 billion of Chinese imports on Sept. 24. Beijing plans retaliatory tariffs on $60 billion of U.S. goods.

The escalating tensions have drawn attention to the leverage that China holds as the largest foreign creditor to the U.S. 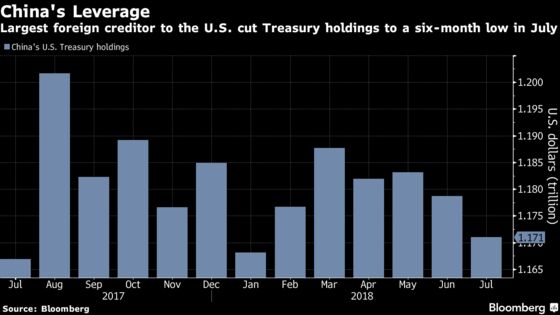 China's foreign exchange reserves rose in July to $3.12 trillion, even amid a continued slide in the currency. The yuan has tumbled more than 8 percent since the end of March while the nation's stocks have fallen 16 percent, making the Asian nation's assets among the world's worst performers this year.