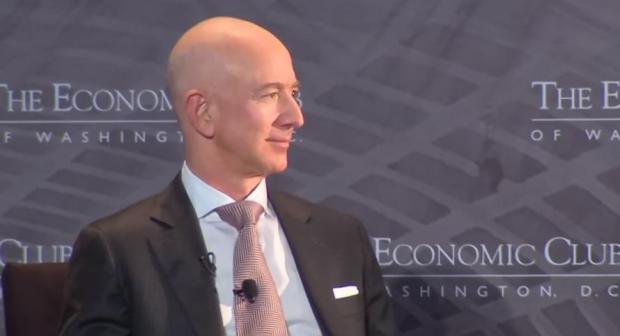 A day after unveiling his first major charitable initiative (an announcement that arrived, coincidentally, we're sure, after a bruising week of headlines detailing the latest crop of worker-abuse allegations directed at Amazon), Amazon CEO Jeff Bezos (also the world's wealthiest man) disappointed hundreds of powerful people who had convened to hear him speak - as rumors swirled that he might reveal the location of Amazon's much-hyped HQ2 - last night at the Economic Club of Washington DC. But instead of an outright reveal, Bezos assured his audience that Amazon plans to announce the location by the end of the year, though he wouldn't elaborate beyond that.

According to CNBC, Bezos, who was interviewed by private equity titan David Rubenstein, assured his audience that Amazon's team is "working hard" on evaluating the finalists (the company announced 20 finalists earlier this year).

"The answer is very simple...We will answer the decision before the end of the year," Bezos said. "We will get there." Bezos swiftly changed the subject to his recently launched "Day One" charitable fund, which he recently seeded with $2 billion of his personal fortune.