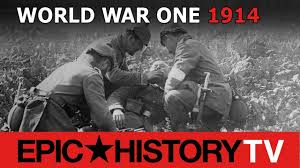 Instead, it's identified by a vague mixture of concepts, names, and events: the Lusitania, "Wilsonian Idealism," Versailles, Theodore Roosevelt.

The First World War – known as the "Great War" in Europe – has largely faded from memory on this side of the Atlantic. Arguably, this is because our involvement was so brief – joining the slaughter over two years after it began and leaving it just over eighteen months later.

But, beyond the fact that it claimed the lives of over 100,000 Americans, there are good reasons why, a century later, we should remember this chapter in our history, not least because it has ominous parallels with today.

The political science textbooks tell us that "checks and balances" are central to American democracy.

And, with a mechanical and historically dubious recounting of Marbury v. Madison (1803), students are immediately taught about the rise of one of these great barriers to tyranny: judicial review. Unlike in the crusty old monarchies, they learn, wise and dispassionate judges can protect us from oppressive laws and power-hungry politicians.