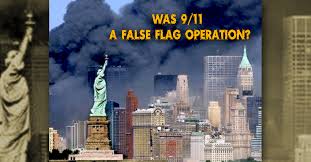 This is the mantra. The mantra that is repeated in the wake of every major false flag, every psychologically traumatizing incident that the deep state wishes to become a rallying cry for their next agenda item.

And so it is completely unsurprising that this mantra has been invoked to remind the public of that foundational event of the age of terror, 9/11.

"Never forget," we are told by the mockingbirds of the establishment press every year come September. And when I say "every year" I mean every / single / year / without / fail. (Well, sometimes it's a fail, but you get what I mean).

But never forget what? That is the question.

Never forget that false flag terrorism has been used time and time again throughout history to whip up war hysteria among the public? Never forget that the Afghan war and the war of terror in general was based on the lie of 9/11? Never forget that the official government conspiracy theory of 9/11, the 9/11 Commission Report, is a tissue of lies and omissions based on torture testimony that would be inadmissible in any court and is self-contradictory to boot? Never forget that official government cover-ups into the events have relied on outright lies, confiscation and memory holing of key evidence that proves that 9/11 was not the work of the magical cave-dwelling dialysis patient and his band of box-cutter-wielding henchmen?

No, of course not. "Never forget" the officially sanctioned, government-approved lessons of 9/11, silly! That's what "never forget" means.

Never forget that it was those scary dirty bearded Muslim boogeymen who did 9/11, and it was definitely the Muslims who were cheering the destruction of the Towers, not the Israeli Mossad agents who were there to "document the event."

Never forget that it was those damn dirty Afghans who were just begging to be smart bombed on 9/11, despite the fact that 92% had never even heard of 9/11 in a 2010 poll. (They must have forgotten about it in the meantime.)

Never forget that the fact that every single major terror bust since 9/11 has turned out to be a plot instigated, planned, funded and "busted" by the FBI just means that the FBI's loyal agents are really really really good at their jobs!

Interview With A Coma Victim

Research Tools You Should Know About – #SolutionsWatch