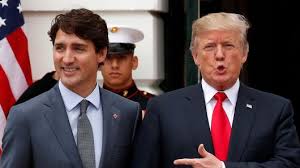 While the mainstream media liked to refer to deceased warmonger John "Songbird' McCain as a maverick, President Donald Trump is the real maverick on the global stage. Cucked Canadian Prime Minister Justin Trudeau even admitted as much about his frequent adversary in a recent interview.

"One of the things that is clear is that we have red lines that Canadians simply will not accept," Trudeau said to an Edmonton radio station. "We need to keep the Chapter 19 dispute resolution because that ensures that the rules are actually followed and we know we have a president who doesn't always follow the rules as they're laid out."

Despite Trudeau's whining about Trump's unfair nature, the cuck is obviously getting ready to fold. He is beginning to admit that concessions need to be made to the superior deal maker.

"We will defend supply management, as I've said, but is there room for flexibility? We'll see, and that depends on the kinds of negotiations we have," Trudeau said. "We're not going to accept that we have to sign a bad deal just because the president wants that. We'll walk away and not sign a deal rather than sign a bad deal for Canadians."

President Trump makes it clear that he is after the Canadian politicians and bureaucrats, not the people of Canada who he loves.

"I'm not blaming Canada. I love Canada," he said. "But they and other countries have been taking advantage of the United States for many years. And this is the president that has stopped it."

It's hard to imagine any scenario where a man as weak and effeminate as Trudeau will ever gain the upper hand on a superior alpha male like Trump. Canada ought to impeach their sorry leader before they get completely bent over (similar to how Fidel Castro allegedly bent over Trudeau's mother) on trade.

Firefighters, emergency medical workers and police stood for one hour in silence