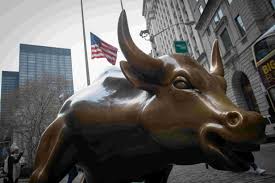 What? Haven't you heard the news? The US stock market bull run of 2009-2018 has just surpassed the 1990-2000 bull run to become the longest period of continually-rising stocks in US history.

It was March 9, 2009 when the market finally bottomed out after the Lehman crisis. That was the day that the S&P 500 hit precisely 666 (nothing to see here, conspiritards!). From that day on, both the S&P and the Dow have been on an uninterrupted upward trend, hitting all-time record high after all-time record high. For those keeping track at home, that's 3,453 days of uninterrupted gains as of last Wednesday.

To put that number in perspective, the previous longest-ever period of rising markets lasted 3,452 days, from October 12, 1990, to March 24, 2000. You might remember the latter half of that bull run as the dotcom bubble, which came to a crashing halt when people finally realized that websites like Webvan (look it up) weren't quite worth their billion dollar valuations. In other words, the last bull run was a big, fat, festering bubble inflated by hype and greed and "irrational exuberance," and it came to a messy end that wiped out many people's savings.